Nile factory for feed in Damietta

Nile Feed Factory is a factory located in Kafr Saad city in Damietta governorate, which manufactures poultry feed by mixing a number of important nutrients for chicken growth. These ingredients differ in some proportions or some minor additives according to their purpose, whether for flesh or egg production.

It was found through the field visits of ECO experts that the production capacity of the Nile Feed Factory in Damietta was about 65 tons / day (24000 tons / year) of poultry feed. There have also been many negative indicators of production processes:

To overcome these problems, it was found that all production processes must be adapted technologically and environmentally from the process of receiving and purifying raw materials, crushing and grinding of corn, mixing, compressing, cooling, granulating processes and finally  automatic filling.

It is also necessary to replace the current steam boiler, which contributes significantly to the loss of about 25% of energy, with another modern and environmentally friendly boiler to save losses and reduce emissions. 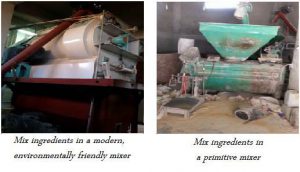 Should you have any queries .. We are here to help